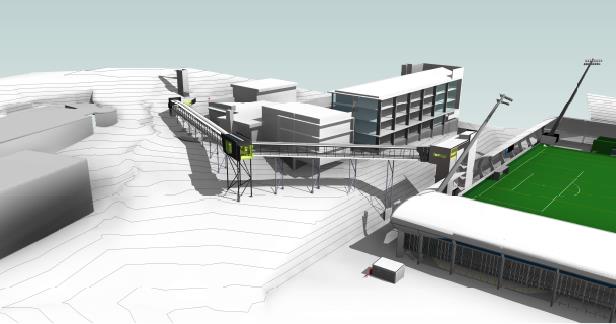 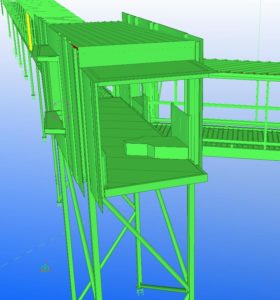 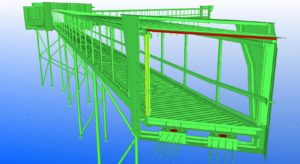 Modularisation was at the forefront of the design consultant’s minds when documenting the design for this structure. Steelcad Drafting were brought on early by the builder (Adco constructions) to work with the consultants to deliver this project for the client.

The structure comprised of a central node of stick built steelwork and this was to be the first erected part of the structure after the abutment landings had been setout and welded into place. Then there were a series of welded frame trestles to support fully welded floor frame segments, followed by a simple stick built roof structure of posts and beams. In the end, all sides of both walkways were to be fenced with a woven stainless steel mesh netting.

In early concept meetings with the consultants and the builder, the concept of the erection sequence and modularization intent would be explained to all by the Engineer (Bligh Tanner). Essentially, as indicated by the images below, each module was to be bolted up as a unit and then be lifted up as one assembly for the purpose of speedy erection and to also minimize at height working risk.

Each floor module is a fully welded steel frame, with REO and Bondek welded into place – the concrete was to be poured at height once the steel structure was in place. The roof material, being a Bondor panel system, was also to be screwed off to the modules as part of the modular lift.

As the concrete wasn’t to be poured until later, the methodology of the lift was discussed at length and Steelcad put forth the idea of a lifting jig which tucked into the PFC flanges, thus removing the need for any weld on lifting lugs which would obviously have to be removed later and would most certainly compromise the longevity of the galvanized finish of the floor frame. Any weld on lugs would also prevent the concrete being screeded as they would be in the way until such a time they were removed.

Each modular lift was analyzed for the builder to give Assembly number and max weight of each lift.

The purpose of the jig was to allow slings to be fitted outside the modular frame and to run up to two spreader bars over the roof, well clear of all of the steelwork. The jigs could be reused for all other frames, once one lift was complete, the jigs would be unbolted and then fitted off to the next module and so on. As the REO L bars were at a tight spacing, getting the Bondek into the frame after the frame was fabricated and galvanized was a challenge. Steelcad proposed an alternative spacing situation of the L bars which gave access for the sheets to be slid into position and locked off to one another and that was sets out on the Marking plans – see images below: 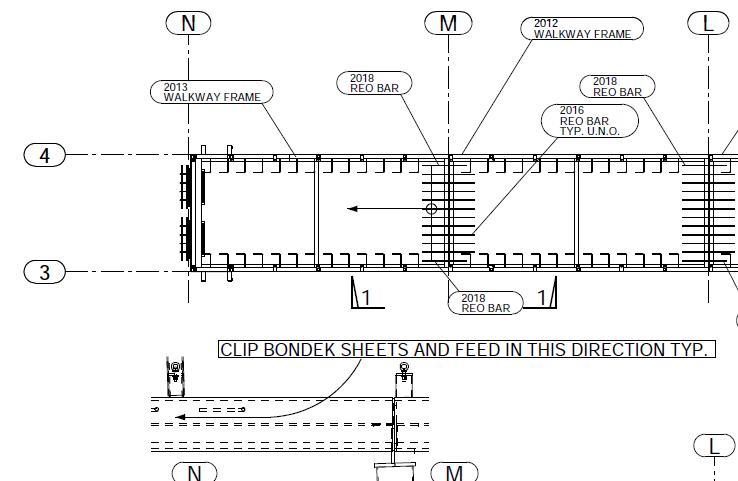